We ship Anywhere in the USA for FREE! 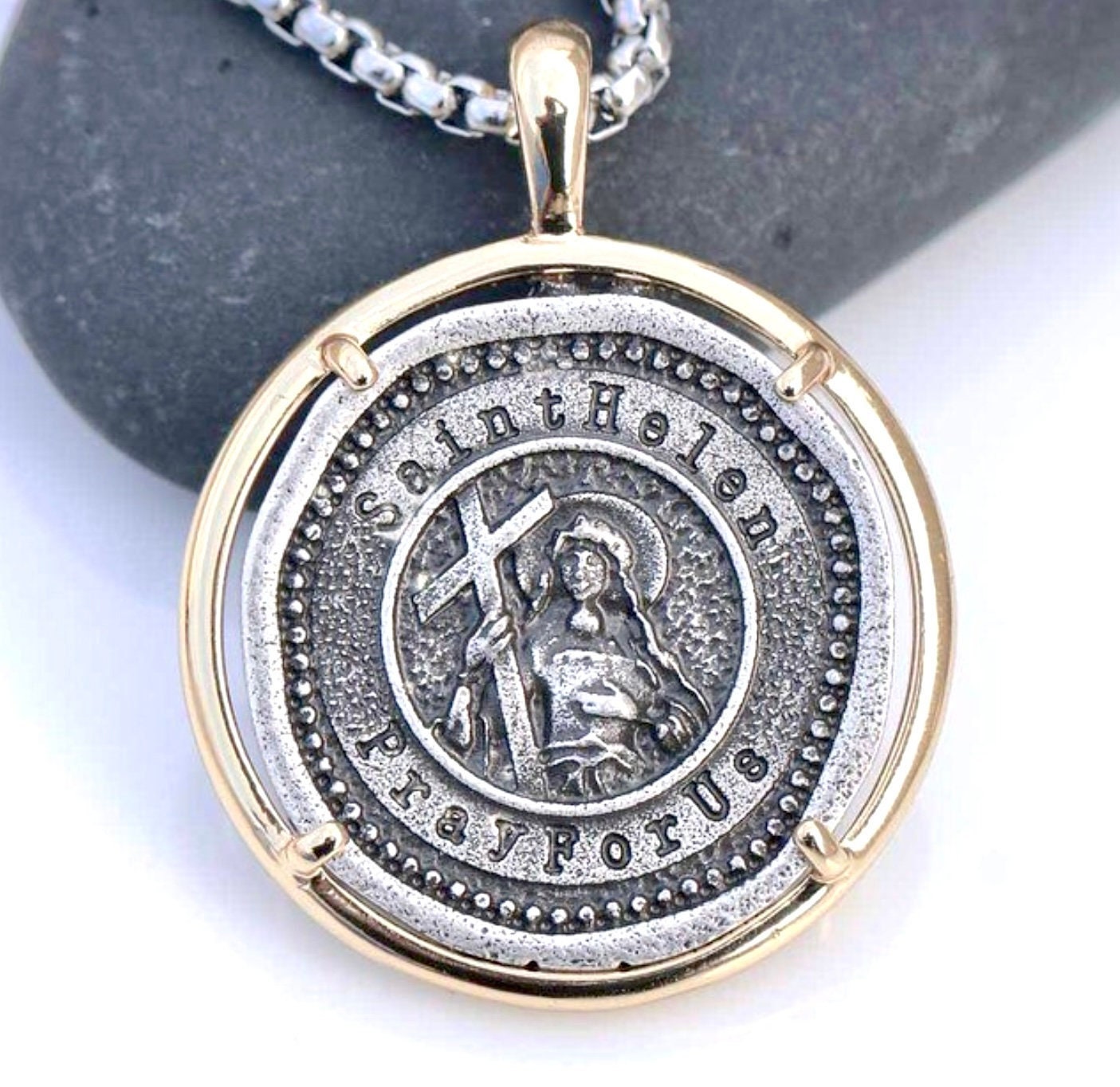 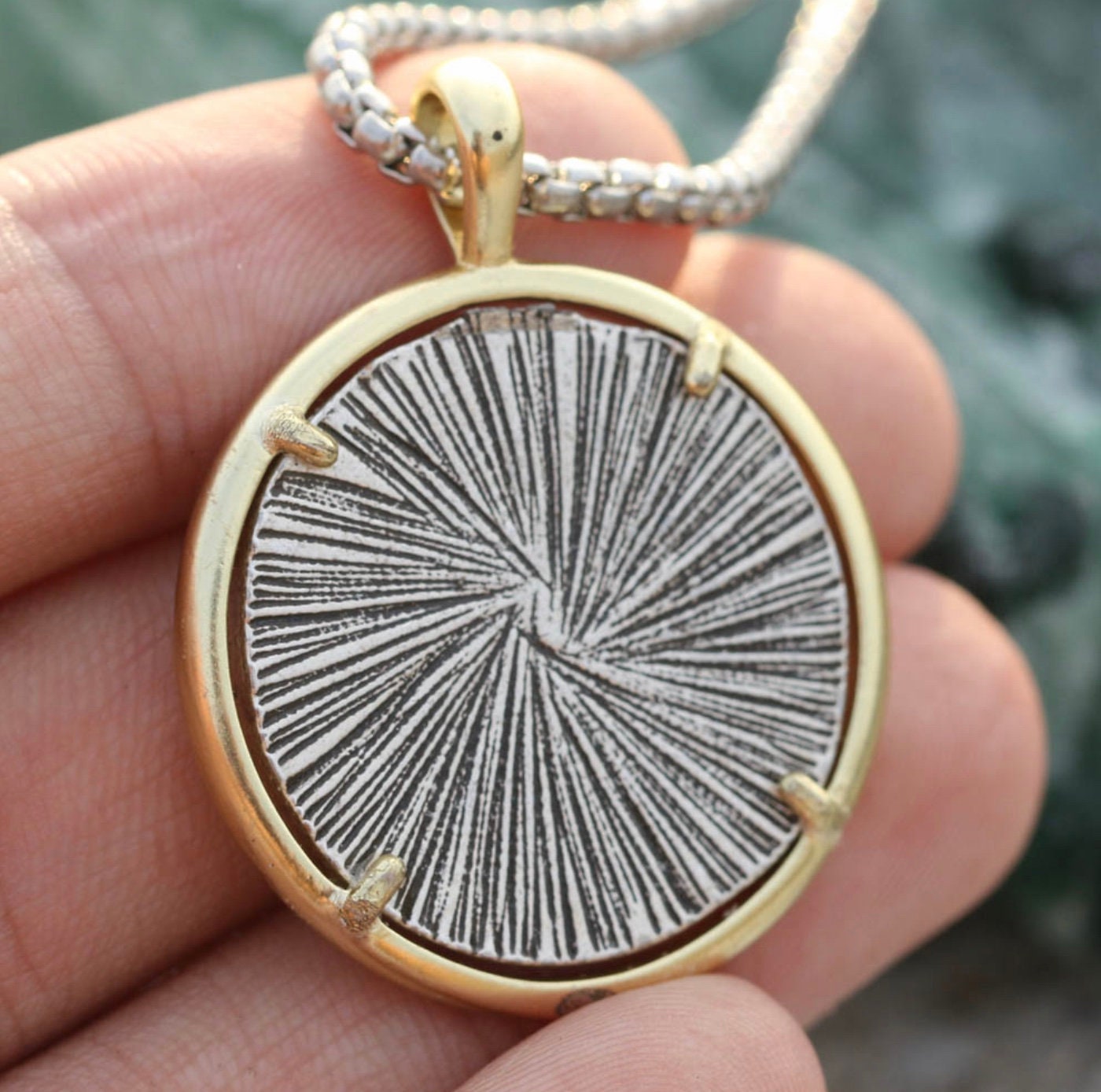 BONUS- Each Medallion comes with our exclusive Heavy Stainless Steel 3mm x 24" Rounded Edge Box Chain. This chain is silky smooth to the touch and will not kink or pull the hairs on your neck. Each Medallion produces a timeless keepsake with both dimension and texture. A Saint Michaels Jewelry exclusive offer!

Saint Helen (Flavia Julia Helena Augusta) was the mother of the Roman Emperor Constantine. Constantine was the first emperor to declare Christianity as the official religion of the Roman Empire. He sanctioned a journey to Palestine with the purpose of Helen finding the True Cross during her journey. She discovered three crosses and believed one of them to be the True Cross of Christ. To test the crosses, a Leper was asked to touch each of the crosses. Nothing happened with the first or second crosses. However, as he touched the True Cross he was instantly cured. Where is this Cross? Helena brought back with her large parts of the True Cross (from the tomb in which Jesus was buried at Golgotha), the fragments were then stored in her palace's private chapel that can be still seen today. Her palace was later converted into the Basilica of the Holy Cross and is now located in Rome at the Church of Santa Croce in Gerusalemme.

Each Medallion produces a timeless keepsake with both dimension and texture.

Jewelry makes your day just a little bit brighter. That silver bracelet, little sapphire gold ring have a special life meanings and it just makes you feel good to wear them!

Jewelry makes you feel young, attractive and empowered. Wearing jewelry fills one of our higher needs, I am attractive and I am wooing you by my appearance.

Jewelry makes you creative and it invokes out of the box thinking. You know the designer had to think out of the mainstream to come up with such a fantastic creative design. Their originality and uniqueness is a reflection on you!

Jewelry makes you feel elegant and it rouses actual joy and excitement knowing you are wearing something that was a designed just for you. You feel beautiful in your own skin because you deserve to feel beautiful!

Jewelry doesn’t discriminate, no matter what size, shape or skin color you are, you can always find something unique and beautiful that suits you!

Jewelry always fits. Unlike shopping for clothes or shoes, as long as you have ears, a neck, wrists or fingers, you will be able to find some piece of jewelry that is just right for you.

Wearing jewelry is healthy! Since ancient time, people have known the magical powers of silver, copper, gold for fast union of wounds, prevent wound infection, growth of bacteria, pacifying the soul, relieving pain, eliminating palpitation or removing pathogens. It’s an old saying that “wearing silver is a friend of health and wealth” mainly because silver can absorb toxin excreted from human body, which is also the cause of blackened silver jewelry with some wearers. Silver has the good effect as an anti-biotic and sterilization; common anti-biotic is only effective to 6 types of pathogenic bacteria, but silver can kill 650 types of pathogenic bacteria! Metals generates their own magnetic field and within a given range release a mass of anions to excite energy with health efficacy to the human body!

So give a gift of jewelry for birthdays, anniversaries, holidays and this expression of your love will be recreated each time that gift is worn!

I gladly accept returns and exchanges

Ship items back to me within: 14 days of delivery

But please contact me if you have any problems with your order.

The following items can't be returned or exchanged

Because of the nature of these items, unless they arrive damaged or defective, I can't accept returns for:

0 items in your cart